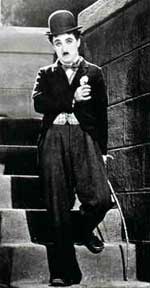 Charlie Chaplin was one of the famous stars in the history of the cinema. He was certainly the most famous comic actor of the cinema. His first films were in the age of silent movies. He wrote and directed nearly all of his films and composed the music of all his sound pictures.

Charles Spencer Chaplin was born in 1889 in London. His family was poor and he had a hard childhood. In 1890 he left Britain for the USA, in 1914 he made his first film. In his films he created the character of a little man who always faced life with courage.
Chaplin was married four times, he had four kids. In 1952 he left the USA with his family and lived in Switzerland until his death.

1. Who was Charlie Chaplin?

3. Did he write and direct all his films?

4. Who composed the music of all his sound pictures?

10. How many times was he married?